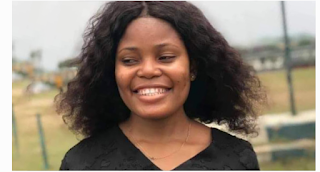 niobong Umoren, the lady reported missing on Twitter, has been found dead. The news of her demise was announced by Twitter user @UmohUduak1, who had initiated the search for her missing friend on April 29.

On Sunday morning, @umohuduak1 uploaded a video of her in tears, and a following tweet confirming the death of her friend. 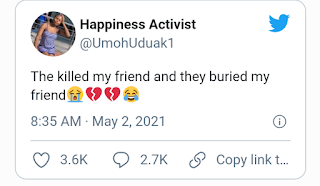 The news came as the hashtag #FindHinyUmoren was gaining traction on social media, garnering attention from many concerned Nigerians as individuals tried to locate the missing woman.

The police announced that they had arrested two suspects believed to have played a role in the disappearance of Ms Umoren in Akwa Ibom. 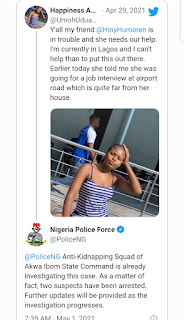 Ms Umoren had announced on Twitter on April 27 that she was in need of a job.

“#AkwaIbomTwitter please I’m really in need of a job, something to do to keep mind and soul together while contributing dutifully to the organisation. My location is Uyo, I’m creative, really good in thinking critically and most importantly a fast learner. CV available on request.”

Her remains were reportedly dumped in a shadow grave in Uyo, although Peoples Gazette has yet to independently verify this social media claim. The police did not return calls seeking comments about Ms Umoren’s reported death on Sunday morning.