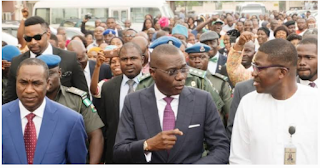 Governor of Lagos, Babajide Sanwo-Olu, says his government would relaunch the Lagos State Residents Card, to ensure that the records of Lagos residents are in the state’s database.

The governor made this statement during a meeting with the state’s stakeholders on security matters held on Monday at Ikeja.

Mr Sanwo-Olu mentioned that the card would be a critical part of the state’s security structure, adding that it would help to gather information on residents’ identity.

“This database will form a critical part of our security architecture, as it will ensure that we know who is who, at any point in time,” the governor said.

Speaking further, the Mr Sanwo-Olu explained that the law on cultism ‘Prohibition of unlawful Societies and Cultism Act of 2021’, was signed by his administration to strengthen the jail penalties for convicted cultists.

“The law prescribes a 21-year jail term for convicted cultists. The new law strengthens the penalties applicable to cultists, and expands coverage to the entire society, unlike the old law which was restricted to cultism by students of tertiary institutions.

“With the passage of this new law, it will help in widening the dragnet in the hunt and prosecution of these nefarious gangs intent on sowing fear and chaos in the State,” Mr Sanwo-Olu explained.

As of the time of filing this report, efforts to reach the spokesperson for the governor for clarification on the modalities for the registration was abortive, his lines were unreachable.

The Lagos State Residents Registration Agency, LASRRA, was signed into law on June 27, 2011. The state government adopted the system to identify the state residents and ensure that there is adequate planning and utilisation of government budget.

LASRRA on its website, says that the agency was established to create a unique means of identification for all state’s residents.