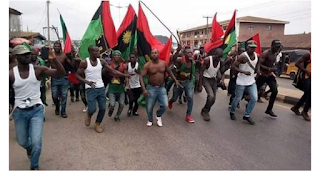 The Indigenous People of Biafra has ordered protest and a sit-at-home on May 30.

It also banned church services on that day in Biafraland.

It said the protest would hold in 100 countries where IPOB members and sympathisers reside.

The group’s media and publicity officer, Emma Powerful, made this known in a statement on Sunday.

He said the exercise was to honour its fallen heroes and heroines, adding that it would be observed in markets, churches, parks, airports and seaports within and outside the region and beyond.

The IPOB publicist said there would be no procession, protest nor church services anywhere in the zone, urging its members to stay indoors throughout the day.

The statement read in part, “We the global family of the Indigenous People of Biafra wish to announce to the public and Biafrans both home and abroad that the annual anniversary of our fallen heroes and heroines will be on Sunday, 30th of May 2021.

“As usual, there will be a total lockdown of the entire Biafra land on that day.

in Yoruba, Middle Belt and other Christians living in the far North to solidarise with us in the event as we honour all those who have paid the supreme price in our struggle for total freedom.

“All Biafrans living overseas must hold rallies in their respective countries of abode in honour of our fallen heroes and heroines including the gallant Imo State Eastern Security Network commander, Ikonso and his men murdered by the Nigeria security agents.

“The rallies will also show the outside world of our resolve and preparedness to leave Nigeria. We equally advise our Diasporan people to ensure they get the written approval of their host countries before embarking on the rallies.

“30th of May every year is very dear to Biafrans because it was the date our Hero, Emeka Odumegwu Ojukwu, declared our resistance to the genocidal attacks by Nigeria and Fulani Janjaweeds which culminated into the 30-month civil war from 1967 to 1970.

“We shall always remember all those who died in the course of the war and our march to freedom.

“Consequently, there will be no movement on the roads throughout Biafraland; no banking or financial services in our territory; no commercial activities of any kind.”