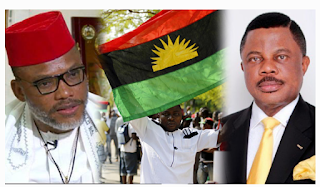 Specifically, social and economic activities are grounded in Awka on Monday following the order given by the proscribed Biafra agitators, the Indigenous People of Biafra (IPOB).

The group said it declared a sit-at-home order to remember more than five million Igbo people who died during the three years of civil war between the defunct Biafra and Nigeria.

IPOB said May 31 was observed as a special day to remember the dead Igbos.

Self-style IPOB leader, Nnamdi Kanu, said the usual date for the celebration, May 30, was changed to May 31 to allow churchgoers to go for service and take part in the remembrance day.

An Awka resident, Ngozi Nwosu, said, “I do not want to go anywhere and thank God that my children’s schools are on break. So, all of us are indoors to avoid problems.”

Another resident, Ogochi Ezeike, stated that the leadership of Eke Awka Market, the major market in the state capital, would not open for business due to the IPOB order.

“As you can see, everywhere is totally shut down, even if one is in the market who will buy from the person?” he said.

Most shops at the popular Aroma junction, Awka, Zik’s Avenue, Unizik junction, and other popular places are not open for business.