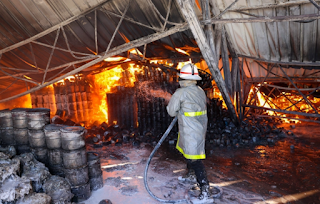 Dozens of air strikes pounded Gaza on Tuesday as US President Joe Biden expressed support for a ceasefire between Israel and Hamas in a phone call with Prime Minister Benjamin Netanyahu.

Biden held his third phone conversation with Netanyahu since violence flared on May 10 and expressed support for a ceasefire. But the US president stopped short of demanding an end to the violence.

Al Jazeera’s Nida Ibrahim reporting from Ramallah in the occupied West Bank near the illegal Israeli settlement of Beit El said Palestinians were seen throwing rocks at the Israeli army near the Israeli military checkpoint.

“An hour or two after that, we heard gun shots coming from the Palestinian side and we believe they are from Palestinian militants and then the Israeli military responded with live ammunition,” Ibrahim said.

“Confrontations continued after that escalation and we’ve been hearing more and more rounds – sometimes they’re rubber coated steal bullets, sometimes it’s live ammunition by the Israeli army towards the protesters.

“It is definitely not a usual scene [since] there are not many arms here in the occupied West Bank. If there are, the Israeli army comes in and arrests those Palestinians,” Ibrahim said.