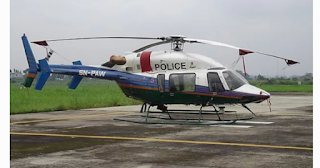 The Nigerian Police Force has deployed one of its helicopters for the rescue of some Chinese nationals in Ogun, Peoples Gazette can report.

The police chopper was sighted at Owode Egba, about 37km from the state capital Abeokuta. The sleepy town is surrounded by many adjoining villages and forests.

Witnesses say that the abduction which involved a Chinese family occured early hours of Sunday around Ofada area of the state.

Police spokesman in Ogun State, Abimbola Oyeyemi, said he could neither deny nor confirm the story as he is not aware of any abduction of Chinese nationals. He however said the helicopter was deployed as surveillance to beef up security in Ogun State.

Nonetheless, police sources in Ogun confirmed the abduction to The Gazette Sunday evening under conditions of anonymity as they were not authorised to speak publicly on the matter.

The sources said that although no official reports have been made, actions are being taken to neutralise activities of criminals in the area.

“We received information from some people that some foreign people were abducted. Foreign people suspected to be Chinese Tomato farmers in the area and I think actions are being taken to confirm the reports, particularly the operation of criminals in the forests nearby but no official report has been made,” a police source said.