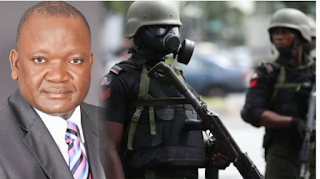 The suspects confessed to have completed plans to kidnap an employee of Joseph Sarwuan Tarka University, Makurdi.

The police in Benue say they have arrested a kidnap kingpin, Terwase Agbem, and one Mson Yaasa of Adikpo, Kwande local government area.

According to the police, other members of the kidnap gang are currently at large.

“Following information about the regrouping of a kidnap gang in Makurdi, a team of police officers was deployed to trail and arrest the suspects,” a police spokeswoman, Sewuese Anene, said in a statement on Monday in Makurdi.

She added, “These suspects had assembled at Ankpa Quarters, Makurdi, on May 22 and perfected plans to carry out their nefarious act when the operatives invaded their hideout and arrested them.”

Ms Anene disclosed that the suspects confessed to have completed plans to kidnap an employee of Joseph Sarwuan Tarka University, Makurdi, for failing to pay for a contract executed in the school.

The police spokeswoman added that efforts were in progress to arrest fleeing members of the gang.