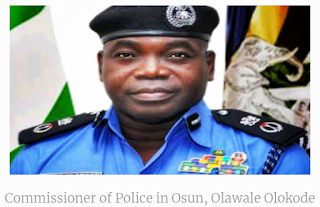 Eight suspected members of a syndicate have been nabbed in Osun State.

The suspects, who allegedly fled from Benue after killing Akiishi Catherine, 65, relocated to hide in Osun after operating in Benue,  spokesperson Yemisi Opalola said in a statement on Saturday.

The suspects who were arrested on Friday at Omo Ijesa village following credible intelligence reports, confessed, during interrogation, to have killed three others in addition to their last victim in their previous operation.

“The suspects were arrested on May 7, after the command received credible intelligence which they acted upon in a follow-up case of the kidnap of a 65-year-old Mrs Akiishi Catherine in Benue State.

“The operation was led by the Commissioner of Police in Osun, Olawale Olokode.

“Before the arrest, police investigations revealed that the suspects relocated to Osun after the kidnap of the woman as a deceptive tactic to avoid arrest by the police in Benue.

“The suspects have also planned to use Osun as a haven for the negotiation and collection of ransom even after murdering the woman in cold blood,” the spokesperson said.

According to the spokesperson, the suspects, who are between 18 and 25 years will be “handed over to the Benue Police Command as soon as preliminary investigations are concluded.”

The commissioner called on citizens to support and collaborate with the police to rid the state of criminal elements threatening the peace, security and safety of the people.