Lawan, Gbajabiamila under fire over stance on restructuring - The Naija Weekly

Home News Lawan, Gbajabiamila under fire over stance on restructuring

Lawan, Gbajabiamila under fire over stance on restructuring 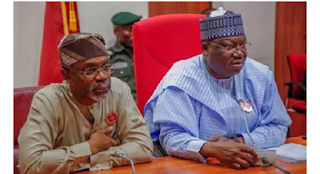 The Yoruba socio-political group, Afenifere, said it does not reckon with the National Assembly, in the first instance, as having the moral right to amend what it called the fraudulent 1999 constitution, while the Pan Niger Delta Forum (PANDEF) described the statement by Lawan and Gbajabiamila as ridiculous and irrational.

The Conference of Nigeria Political Parties (CNPP) wondered why the recommendations of previous constitutional conferences could not be adopted to address Nigeria’s problems, while Speaker Kunle Oluomo of the Ogun State House of Assembly said Lawan’s comment has exposed his “premeditated position” against the Asaba Declaration.

Human rights activist, Olisa Agbakoba (SAN), said he does not see anything offensive in the governors’ position.

The two principal officers of the National Assembly had differed with the governors on their ‘Asaba Declaration’ with Lawan in particular challenging them to start restructuring from their states.

He told them to avoid what he branded regionalism.

Gbajabiamila, on his part, said: “If truth be told, we all have equal shares in the blame for what is happening today.”

But he seemed to have made a U-turn yesterday after the spokesman for the House of Representatives, Benjamin Kalu, said the Green Chamber and its Speaker are not opposed to the call by the Southern Governors for the restructuring of the country and the need to convene a national dialogue.

Speaking yesterday at the end of a meeting of Afenifere at his Ogbo country home in Odogbolu Local Government Area of Ogun State, the acting leader of the group, Chief Ayo Adebanjo, asked President Muhammadu Buhari to prioritise restructuring of the country ahead of the 2023 general elections.

Restructuring, according to him, is the only factor capable of guaranteeing the continued unity of Nigeria, warning that if the flawed and lopsided federal system being practiced today persists amid cacophony of agitations, the constituent parts may have no option but to demand “to thy tent oh Israel.”

Chief Adebanjo said: “We urge Buhari to bury the idea of holding election before returning to federalism by restructuring the country.

“There must be a country before elections are held. It would be patriotic of him to heed this advice.

“It is mischievous for President Buhari’s government to accuse advocates of restructuring as secessionists and separatists. It is the system that our founding fathers, the Saudarna of Sokoto, Sir Ahmad Bello, Chief Obafemi Awolowo, Dr. Nnamdi Azikiwe agreed to before the British government granted us independence in 1960, after the collapse of Macpherson constitution in 1953.

“The clamour for the return of the country to federalism is borne out of the obnoxious provisions in the constitution which have made economic and political progress impossible, and this has been the main cause of instability in the country.

“The Yoruba people are the only ethnic group that has never called for secession. We have invested in a united Nigeria that we will resist any act that will lead to its break up. We will be in Nigeria as equal partners in a federal Nigeria. A Nigeria in which we will play a second fiddle is most unacceptable.

“Therefore, our irreducible minimum condition of staying in Nigeria is a restructured Nigeria. Anything short of that is ‘to thy tent, oh Israel’. The unity of horse and the rider in which a section of the country is the rider and we the horse is most unacceptable.”

He also expressed support for the prohibition of open grazing of cattle.

National Publicity Secretary of Pan Niger Delta Forum (PANDEF), Hon Ken Robinson, speaking to The Nation on the phone yesterday, called the statements by Lawan and Gbajabiamila ridiculous and irrational.

He said: “There is a constitution of the Federal Republic of Nigeria that is lopsided. They can afford to make this kind of statement because the National Assembly itself is lopsided against southern Nigeria with all the ridiculous numbers they post.

“It is unfortunate and that is how bad the situation is; that those who should say the truth will choose to call black white. And that is why Nigeria is how it is.

”The National Assembly has failed to carry out its oversight functions, and that is why we are having the issues we are having.

“They claim that they are having a constitutional review and then the Speaker and the Senate President are making this kind of ridiculous and irrational statements. They spoke like ordinary people on the street who are not sensitive to the situation in the country.

“We are greatly disappointed in their statements. I think they need to apologise to the governors and the people of southern Nigeria.”

What is wrong with previous confab resolutions and recommendations? -CNPP

The Conference of Nigeria Political Parties (CNPP) called for the implementation of the recommendations of previous constitutional conferences to address Nigeria’s problems.

The Secretary-General of the group, Chief Willy Ezugwu, in a statement, faulted the Southern governors’ position on a fresh national dialogue.

He said: “Their call for a national confab is faulty as the recommendations from past national dialogues are accumulating dust and should be put to use by the National Assembly as there are no new issues in the country that have not been discussed at earlier national confabs.

“But, unfortunately, the current leadership of the National Assembly has remained the worst rubber stamp principal officers ever.

“Obasanjo’s national dialogue, the PRONACO people’s confab by the late Chief Anthony Enahoro, and Jonathan’s 2014 confab all have recommendations which addressed our current challenges, among others.

“If Nigeria had implemented the recommendations of the 2014 confab, there would have been a state police today and we would have had a part-time legislature, among others.

“That would have nipped in the bud current restiveness and agitations across the country, including the ongoing deafening insecurity.

”Why have Nigerian political elites continued to postpone the doomsday?

”The earlier we wake up and confront our fears, the better too for us all.”

Speaker Kunle Oluomo of  the Ogun State House of Assembly expressed shock at Lawan’s comment, which he said betrayed the Senate President’s premeditated position on the ‘Asaba Declaration’.

Speaking in an interview yesterday in Abeokuta, Oluomo accussed Lawan of insincerity.

”If Senator Lawan is very sincere about amending the constitution to suit the exigencies of this time, I don’t expect him to fire back at the governors for airing out the opinion of the people,” he said.

He added:”This is about the first-time in the history of the country when the governors of the southern part of Nigeria or any governor whatsoever would come out openly on this matter and align themselves with the request and demand of their people, and I don’t know when emphasising or airing what your people want becomes a crime in the Constitution of the Federal Republic of Nigeria.

“Almost everybody in the country has been agitating for restructuring since we don’t know how we came together in 1914. What is wrong in all of us sitting together and rearranging our union? When has it become a crime in the Constitution of Nigeria to say the mind of those who elected you?