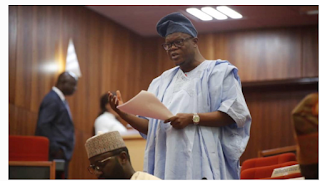 Senator Ajibola Basiru, Chairman of the Senate Committee on Media, has noted the comments of the Attorney General of the Federation and Minister of Justice, Abubakar Malami, stating the Senior Advocate made the comments on the southern governors position on open grazing in pursuit of ethnic agenda.

Mr Basiru in a statement on Thursday, described Mr Malami’s comments as, ‘less than dignifying’ argument of equating open grazing with southerners selling spare parts in the North,” adding that “Anyone who cannot rise above primordial sentiments and pursuit of parochial ethnic agenda need not occupy a position of trust especially at this time of sectional agitations.”

The senator urged President Muhammadu Buhari to remove Mr Malami from office as the statements made are capable of derailing Nigeria’s unity.

Mr Basiru urged the AGF to cite relevant sections of the constitution which allowed the herders to trespass on other people’s land and destroy the crops in the guise of freedom of movement, noting that promoting unity should be the utmost responsibility of the government and actions of persons in authority must be seen to protect the corporate existence of the Federal Republic of Nigeria.

He asked, “It is about constitutionality within the context of the freedoms expressed in our constitution. Can you deny the rights of a Nigerian? For example: it is as good as saying, perhaps, maybe, the northern governors coming together to say they prohibit spare parts trading in the north.”