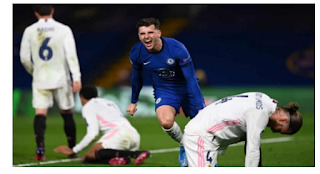 Former Liverpool striker Michael Owen has backed Chelsea midfielder Mason Mount to go on and become one of the world best players in no time.

Owen hailed Mount and young Manchester City midfielder Phil Foden, as he backed them to become two of the best players in the world and reach the same level as Kylian Mbappe and Erling Haaland.

Speaking on BT Sport, Owen said: “It’s so exciting for the summer of course with England.

“I think Mason Mount, and Phil Foden for that matter, are going to be two of the best players in the world in the future.

“They’re that good. It’s going to be so exciting to watch that.

Asked whether Mount and Foden can be compared to Paris Saint-Germain forward Mbappe and Borussia Dortmund star Haaland, Owen said: “They’re going to get there, Mount is a phenomenal player – but Foden can be one of the best players England has ever seen.”