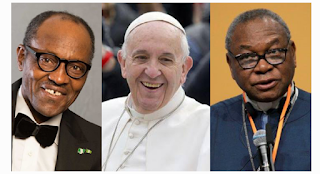 He noted that the Catholic Church’s social doctrine encouraged individuals gifted with good ideas “to go into active politics” so that society can be a better place.

“That is the whole point of this gathering. We encourage our Catholic politicians to be familiar with these social doctrines to guide them in what they are doing. If there is peace for everybody, there is security. The Catholics will benefit from it,” he said.

Mr Onaiyekan made the call at an interactive session with Catholic Action and Catholic Political Stakeholders in Abuja.

He stressed that every citizen must be involved in politics saying.

“If you are not involved in politics and do not care about how you’re being ruled, that means you are not responsible. It is your duty because you have to contribute your quota, whether by advice, by obeying laws, by criticising bad laws, etc.

“That is where we talk about the right of every citizen to participate in government. We are not saying every citizen must end up in the National Assembly. But wherever you are, it is your right, so when we criticise the government, we are using our right.

The cleric further stressed that government should give Nigerians a forum to dialogue.

“Nobody gains anything during conflicts or war. The problems of society will not be solved by war. It will only be escalated. When people go to war, it is the better part that wins.

“You do not win wars because you are right. War is not a way to fight for Justice. It is always a possibility to discuss it. Dialogue is very important. A lot of our issues can be solved by talking.

“We are all complaining that the government is not doing enough. Of course, it will; government can fail if the foundation is not strong. We do not have to continue that way. We can improve. That is why we are meeting so we can do things as they should be done,” the cleric explained.