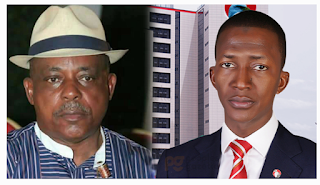 The Economic and Financial Crimes Commission has launched an investigation into Nigeria’s major opposition party, the Peoples Democratic Party’s alleged case of criminal conspiracy, abuse of office, diversion of funds, and fraud.

Specifically, in a letter seen by Peoples Gazette, the anti-corruption agency had invited Adamu Mustapha, the National Auditor, Austin Akobundu, the National Organising Secretary, and the director of finance of the Peoples Democratic Party on allegations of criminal conspiracy, abuse of office, diversion of funds and fraud.

The EFCC will interrogate one of the PDP chieftains today.

The letter asked the National Chairman of the PDP, Uche Secondus, to “kindly release the under listed officers of your party to attend an interview with the undersigned on below scheduled dates, at Economic Governance Section 2, EFCC Headquarters.”

The letter, dated May 17, addressed to Mr Secondus, was signed by the commission’s Head of Operations, Michael Welcas.

The interviews would be conducted at the commission’s headquarters between May 19 to May 21.

In the document, the EFCC requested the PDP officers to “come along with relevant documents relating to the sale of forms into the party’s elective positions from January 2017 to date.”

Last February, The Gazette reported that the PDP’s National Working Committee (NWC), under the leadership of Mr Secondus, was accused of misappropriation of funds since coming into office in December 2017.

The auditor of the party, Mr Mustapha, accused the NWC in a memo circulated among members at a committee meeting.

Mr Mustapha had alleged that over N10 billion generated since Mr Secondus became chairman had yet to be accounted for. He also laid allegations of inflated printing contracts.

According to him, the actual cost of the contract, awarded at N630 million, should not be more than N150 million.

The auditor said the inability of his department to operate as required by the constitution triggered his outcry, as the department lacked access to inputs that will enable it to discharge its duties.