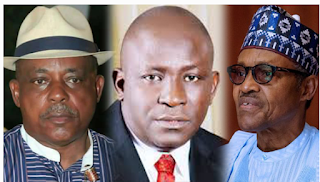 The Peoples Democratic Party has described the government of President Muhammadu Buhari as a criminal and fraud friendly one, following the declaration of the president’s son-in-law wanted over a N31 billion fraud.

Kola Ologbodiyan, PDP’s spokesperson in a statement on Friday said, Mr Kumo’s involvement in fraud “further confirms that the Buhari Presidency is indeed a sanctuary for fraudsters, treasury looters and common criminals.”

“It speaks volumes that the Buhari Presidency had remained silent in the face of this huge fraud involving Mr President’s son in-law; a beneficiary of the primitive family patronage in the Buhari administration, only for certain members of the cabal to be reportedly mounting pressure on the ICPC to let him off the hook,” the statement read in part.

Though Mr Buhari campaigned on riding Nigerian public service of corruption, saying Nigeria must kill corruption before it kills Nigerians, his allies have been fingered in different corruption saga.

Peoples Gazette reported how late Isa Funta, a prominent member of Mr Buhari’s inner caucus, got nearly a billion naira from Federal Inland Revenue Service and how the current Acting EFCC Chair Abdulrasheed Bawa was involved in theft before he was tapped for the job by Mr Buhari.

In January, Transparency International in its 2020 Corruption Perceptions Index (CPI) reported that Nigeria’s ratings plunged to 149 on a categorised scale for “highly corrupt” countries — three places down from its 146th position in 2019.