Nobody has confidence in Buhari let alone pass vote of no confidence – Afenifere leader, Adebanjo - The Naija Weekly

Nobody has confidence in Buhari let alone pass vote of no confidence – Afenifere leader, Adebanjo 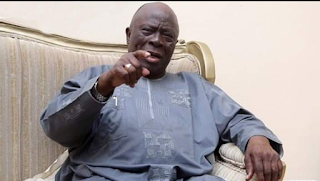 Leader of Yoruba socio-political group, Afenifere, Chief Ayo Adebanjo, says the President, Major General Muhammadu Buhari (retd.), has lost control of the country’s leadership, adding that nobody needs to pass a vote of no confidence in him before the whole world knows that he has failed Nigerians.

The 93-year-old Afenifere leader stated this in an exclusive interview with The PUNCH on Tuesday.

He was reacting to claims by presidential spokesman, Femi Adesina, that disruptive elements were recruiting ethnic groups and politicians with the motive of convening conferences where a vote of no confidence will be passed in the President.

Adesina in a statement on Tuesday had also said the purpose of the move was to further throw the country into turmoil.

But speaking with The PUNCH on Tuesday evening, the nonagenarian Afenifere leader said the President already failed and there was no need for any group to gather anywhere to pass a vote of no confidence in him.

Adebanjo, who described the 1999 Constitution as a fraud, also urged the President to, as a matter of urgency, return the country’s constitution to the 1964 Constitution agreed on by the founding fathers of Nigeria including the late Sir Ahmadu Bello, Sir Obafemi Awolowo and Sir Nnamdi Azikwe.

“I don’t know of any group who wants to take over the government but I know those of us who want the country to be restructured in a peaceful manner.