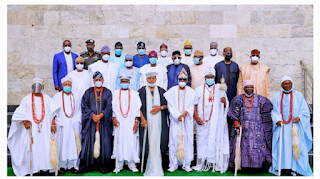 Amidst the speculation over the creation of Yoruba nation, South-West leaders will be holding a crucial meeting next Sunday.

The meeting will be convened by Bisi Akande,  a former governor of Osun State.

The call for an invitation to the meeting reads; “Notice of Meeting: A lot has happened in our country since the last time we met, I hereby formally invite you for a meeting on the state of the nation as follows: Date: Sunday, May 23, 2021. Time: 2pm. Venue: Lagos House, Marina, Lagos. Subject: Review of State of Nation.

Invited members include the APC governors of five states in the south-west; Babajide Sanwo-Olu of Lagos State, Dapo Abiodun of Ogun State, Gboyega Oyetola of Osun State, Kayode Fayemi of Ekiti and Rotimi Akeredolu of Ondo.

Though the reason for the meeting was not revealed in the letter, Peoples Gazette learnt that discussion at the meeting will revolve around the call for secession.

Recently, Yoruba Nation agitator Sunday Igboho and his cohorts have been holding rallies across the South-West to demand the creation of Oduduwa Republic.

On Saturday, the marchers demonstrated on the streets of Osogbo, the Osun State capital, as police watched.

Igboho and other campaigners hinged their agitation on the ‘injustice’ meted out on the Yorubas by the President Muhammadu Buhari administration, coupled with the alleged criminalities being perpetrated by Fulani herdsmen, Mr Buhari’s ethnic stock.

Already, IPOB agitators in the South-East have also called for the creation of Biafra. Their campaign has been gaining traction among the Igbo ethnic group despite government crackdown on arrowheads of the group.

Mr Buhari and many other Nigerian political leaders continue to speak against the proposed fragmentation of the country. Former President Olusegun Obasanjo described secession calls as selfish.