Past leaders should be blamed for insecurity –Amaechi - The Naija Weekly

Home Politics Past leaders should be blamed for insecurity –Amaechi

Past leaders should be blamed for insecurity –Amaechi 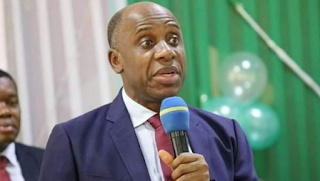 The Minister of Transportation, Rotimi Amaechi, on Friday, said it was wrong for Nigerians to blame the widespread insecurity in the country on the All Progressives Congress-led regime.

The former Governor of Rivers State insisted that it was a misnomer for anybody to claim that banditry was caused by the current regime led by the President, Major General Muhammadu Buhari (retd), when, in reality, “the past leaders should be held responsible for mismanaging the resources of the country. “

Amaechi spoke on Friday during the opening of the North Central Coordinating Office complex of the Nigerian Shippers Council and visual presentation of the proposed Maritime Resource Centre in Jos, Plateau State.

He said, “The earlier Nigerians begin to take people who can perform, the better. The reason we are doing this project is so that we can reduce banditry and insecurity because if you don’t create jobs, you will not reduce crime.

“The reason there is crime is that the rich men who ran the economy of Nigeria for years mismanaged it. I don’t know why Nigerians like to think that we are the first to be in government.

“Before we came, there were previous governments. If they had run the economy in ways that created jobs, today, we won’t be talking about insecurity and banditry. I usually tell people, if the rich do not allow the poor to sleep, will the poor allow them to sleep? All of us will be awake boxing one another.”

According to him, the mismanagement of the resources of all Nigerians “brought us where we are.”

“So the project we are inaugurating today is the result of the management of the commonwealth that belongs to all of us and I am delighted that I approved this for the agency that they should do this project here,” he said.

He expressed optimism that siting the NCCO in Jos with a four-star hotel with 150 rooms, shopping malls, gaming arcades, and sporting facilities, among others, would add a lot of value to the general plan for the development of inland container terminals across the nation and also facilitate more economic activities in the hinterland.

“This is an investment that will not only boost the economic fortunes of the state, but also create job opportunities for many of our teeming youths. It is coming at a time when there is greater demand for hotel accommodation, entertainment centres and tourist attractions to cope with the demand of the local population and the high number of visitors to the state.”