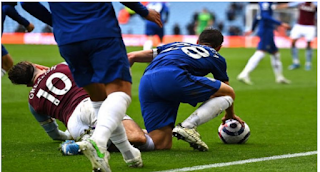 Chelsea captain Cesar Azpilicueta was set off by referee Stuart Atwell during Chelsea’s 2-1 defeat at Aston Villa on Sunday after a coming together with Aston Villa captain (or should I say diver) Jack Grealish.

An independent Regulatory Commission overturned the decision by referee Atwell as Azpilicueta’s act wasn’t an a violent conduct.

Following the decision to overturn Azpilicueta’s red card, our captain will no longer face a three-match ban at the start of next season.