Rudolf Okonkwo: The madness of Abubakar Malami - The Naija Weekly 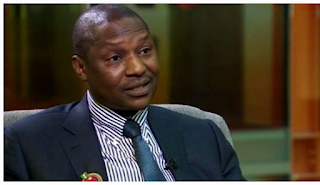 The Usmanu Danfodiyo University-trained lawyer argued that the ban “does not align with the provisions of the Constitution, hence it does not hold water.” If he had stopped it there, it would have been one of those interventions of his that would soon be forgotten by history and forgiven by man. He did a similar thing after the rollout of the Western Nigeria Security Network codenamed Operation Amotekun in January 2020. But the senior advocate of Nigeria went further.

“It is about constitutionality within the context of the freedoms expressed in our constitution,” he said. “Can you deny the rights of a Nigerian? For example, it is as good as saying, perhaps, maybe, the northern governors coming together to say they prohibit spare parts trading in the north. Does it hold water? Does it hold water for a northern governor to come and state expressly that he now prohibits spare parts trading in the north?”

Host Seun Okinbaloye should not have let the minister get away with that attempt to draw a moral equivalence between herdsmen and their cows and spare parts dealers. Mr Okinbaloye should have called Malami out for his “Biafran Boys” moment à la Justice Danladi of the Code of Conduct Tribunal. But since Seun Okinbaloye gave Abubakar Malami a free pass, it is up to us, Nigerians, to subject his illogical reasoning to public scrutiny.

For six years, the government of President Muhammadu Buhari has done nothing to deescalate the thorny issue of open grazing as the open sore of a nation, from which all other worms and venoms crawl out. For six years, Abubakar Malami and his principal have done nothing to address the need to restructure Nigeria, the nursery from which all the injustices in Nigeria germinate. They have shown how incredibly comfortable they are with the status quo that only guarantees a progressive disintegration of the core fabrics of Nigeria.

But the moment governors of southern states of Nigeria smelt the imminent revolt of their people and woke up from their slumber, the Buhari team quickly figured out that restructuring must start from the local government areas.  They also realised that the right of Nigerians and their cattle to live free in any part of the country is sacrosanct.

Nigerians with just an ordinary West African School Certificate can understand without any difficulty the difference between traders buying and selling spare parts in shops and herders who march their cattle from North to South. Those who have never seen a law school in their lives can differentiate the constitutionally mandated rights of movement of citizens across Nigeria and the rights of herders and their cattle to crisscross the overpopulated countryside of southern Nigeria. They are conversant with the consequence of herders and their cattle stumbling across farmlands, destroying livelihoods, and instigating deadly conflicts that have inflamed ethnic sentiments and secessionist movements.

Somehow, despite his education, Abubakar Malami had difficulty grasping those basic facts about our rights terminating at the very point where the rights of our fellow humans begin. Or maybe he does, but he is rather mischievously peddling archaic logic and pedestrian reasoning structured to fool the unenlightened amongst us. Whatever the driving force, it is disheartening that men like Malami are heading the affairs of 21st century Nigeria, a country of sophisticated men and women conversant with modern-day thinking and trends. Malami does not just shame high-flying Nigerians worldwide with his subpar thinking; he lowers the IQ of Nigerians at home looking up to him. These Nigerians think that his high-profile position reflects his possession of any iota of high profile faculty.

The greatest insult any lawyer will bring to the legal profession is to make his audience ask, “What do they teach them in law schools these days?” That is exactly what Nigeria’s Attorney General, Abubakar Malami, made millions of Nigerians wonder.

US Supreme Court Justice Clarence Thomas dislikes affirmative action because he feels that people like him who worked hard to get into law school and graduate with honours get lumped with people who got in and made it through the help of affirmative action. Whenever Malami opens his mouth to weigh in on matters of national importance, he diminishes the Senior Advocate honour attached to his name. He makes any observer wonder if the federal character or another form of affirmative action saw him through law school.

Malami’s greatest malady is his deployment of malicious moral equivalence to support his non-existent, illogical, and shallow argument. It is a behaviour seen in men deficient in honesty and lacking in gravitas. Intelligent men fear nothing more than betraying their moral fortitude. Smart men know that if they lose their moral compass, no matter the title they hold or the regalia they wear, no matter the sycophants chanting their name or the brides softening their footsteps with petals of roses, they are mere hollow men in the eyes of those initiated into critical thinking league.

On the matter of restructuring, Malami repeated the discredited argument of the senate president, Ahmed Lawan, which is that state governors must first restructure the state’s relationship with the local governments before pointing fingers at the federal government. Imagine the audacity. If the attorney general had given a hoot about local government autonomy, he would have been filing lawsuits to force the governors to do so. But he didn’t. Instead, he was busy plotting how to inherit the presidency of a desecrated and decaying nation.

Mr Malami said something else that was particularly important for serious-minded people to pay attention to. Having failed in the last six years to acknowledge that Nigeria’s structure is unjust, unstable, and unsustainable, Malami and his likes are always quick to direct those who desire a restructure of Nigeria to go to the National Assembly to effect the change. It is akin to asking the devil to lead you to heaven.

The National Assembly is one of the institutions in Nigeria conceived in injustice, swim in it, and breathe the same. They also take their cue from an unjust constitution. These are the same folks that Malami and all those who, in all sincerity, do not desire to lift a finger against injustice quickly refer to those seeking reforms to approach.

The absurd maladies of Abubakar Malami and his likes are too many. The most optimistic people in Nigeria are beginning to question if there is any sense in dreaming of the day when the nation’s ideals will get enthroned. The conundrum of the Nigerian state is that for the pursuit of the ideals to start, mediocrity must first be dismantled and lowered from the pulpit it has mounted with great fanfare and unequal arrogance.

The stubborn ripples that emanated from the southern governors’ meeting in Asaba are still travelling up and down the surfaces of the Niger and Benue rivers. The unexpected impact of the ripples is in how they seeped into the underground waters of Nigeria from Sokoto to Minna and from Maiduguri to Kebbi. The earthquakes the ripples cause are manifesting in various ways.

We have seen it in breakouts of rashes on the skins of once immaculate Emirs and Queens, Sheiks and Almajiris, and in the disjointed utterances of men like Nigeria’s Attorney General, Abubakar Malami, and Nigeria’s Senate President, Ahmed Lawan. The ripples triggered an absurd reaction in these men, exposing their nakedness, skeletons, and what their ghosts would look like when they shed their current bodies.

Our ancestors are nodding their heads. Their long-ignored saying that all that it takes for a heap of faeces on the roadside to stop smelling is to pour a handful of sand upon it has come true. For that was all that the governors of southern states did in Asaba. The offensive and obnoxious stench in the air from Malami and Lawan are just the final molecules of a fizzling smell. Shikena!