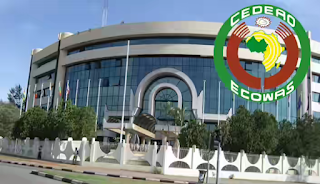 The Senate has asked the Federal Government to withdraw its membership of the Economic Community of West African States if the ECOWAS Commission fails to reinstate a sacked Nigerian director within the next 60 days.

The Chairman, Senate Committee on Ethics, Privileges and Public Petitions, stated this while reacting to feedback from the panel’s Secretariat that the ECOWAS Commission leadership had ignored the resolution of the red chamber, demanding the reinstatement of Mrs Tokunbo Lijadu-Oyemade, its former director of administration who was sacked by the commission, 17 years ago.

The Senate had last month, directed the ECOWAS Commission to ensure the immediate reinstatement of the sacked director.

The Chairman of the Senate panel, Ayo Akinyelure,  gave the directive while ruling on the petition by Lijadu-Oyemade.

Akinyelure wondered why the sub-continental agency ignored a court ruling, Senate resolution and a directive by a former Foreign Affairs minister on the matter.

The sacked director, according to her petition, had approached the 8th Senate over the issue and the red chamber after it deliberated on her case, passed a resolution, demanding her reinstatement.

The petitioner added that she approached the Court when the ECOWAS Commission allegedly failed to comply with directives  and also got a judgment directing the sub-continental agency to reinstate her.

She therefore requested the Senate to look into the matter by directing the ECOWAS Commission to reinstate her and pay all her entitlements.

Several weeks after the last Senate verdict, Akinyelure said the regime of the President, Major General Muhammadu Buhari (retd.), should announce the intention of the Nigerian government to reconsider its ECOWAS membership if Lijadu-Oyemade was not reinstated within two months.

Akinyelure said, “The committee has resolved that since Nigeria being a major stakeholder in ECOWAS, providing 70 per cent of the ECOWAS funding, should protest the injustice against its citizen.

He said, “If an indigene of Nigeria was asked to be reinstated after being unjustly sacked by the three arms of Nigerian government and the instructions were ignored, we have the right to protest.

“A former Minister of Foreign Affairs had written a letter demanding the reinstatement of the sacked director but all the past presidents of ECOWAS refused to carry out the instruction.

“There are court decisions that the woman was innocent of the charges preferred against her and that she should be reinstated but the verdicts had equally been ignored.

“The Senate had also passed a resolution in the 8th Senate that the woman should be reinstated.

“The decision of the Senate of the Federal Republic of Nigeria is being treated with impunity by ECOWAS Commission.

‘‘The Senate is saying if the woman is not reinstated within the next 60 days, the Nigerian Senate will have no option but to ask the Federal Government of Nigeria to opt out of the ECOWAS sub-region and stop  further funding.

“We insist that the decision of the court should be respected by the current president of the West African sub-continental agency.

“The woman should be reinstated and all her entitlements should be paid in full.

“She has not committed any offence and the court decisions were in her favour.

“We wonder why the president of the ECOWAS Commission is not interested in returning her to work since 2004.

“The ECOWAS failed to recognise the decision of the nation’s judiciary, that of the executive and that of the legislative arm of government.

“If she had attained the age of retirement, she should be retired with all her entitlements fully paid.”

The Minister of State for Foreign Affairs, Ambassador Zubairu Dada, had written a letter, dated June 23, 2020, to the President, ECOWAS Commission, Jean Claude Kossi Brau, on the matter

The minister pleaded with Brau to rescind the commission’s decision and reinstate the petitioner because the development was already affecting her social status.

The letter with reference number ECO 190/Vol.Ii was titled ‘Re: Long Standing case of Mrs. Tokunbo Lijadu-Oyemade with the ECOWAS Commission.’

It read in part, “I write in respect of the above subject matter, to remind you that the issue has lingered for 16 years and remained unresolved by the ECOWAS Commission, despite several requests by the Federal Government of Nigeria for a review of the case.

“As you may be aware, Mrs Tokunbo Lijadu-Oyemade was seconded from the Federal Civil Service of Nigeria in the year 2000 to fill the vacant quota post of Director of Administration in ECOWAS Commission.

“A case in point was the letter written on 23rd May, 2011 by the then Chairman of Council, Odein Ajumogobia, where he invoked his powers in Rule 13(3) of the 2010 Rules of Procedure of Council, having discovered the flaws at the 57th Session of the ECOWAS Council of Ministers held in Ouagadougou on 18th and 19th December, 2006 as it relates to Mrs. Lijadu-Oyemade’s case.’’

The Senate panel therefore insisted that, among others, the pending directives of the former Nigerian Chairman of the ECOWAS Council of Ministers, Ajumogobia, be complied with by the ECOWAS Commission as was done with his other in-between-sessions’ instructions/approvals in 2010 that favoured the  careers of non-Nigerians.