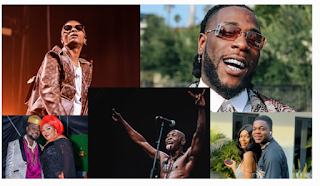 It’s been an exciting week for newsmakers in the Nigerian showbiz sector. People Gazette brings our esteemed readers a roundup of major happenings during the week in Gists Of The Week (GOTW).

Seun became a media sensation during the week as a video of him storming out furiously on the Lagos state Governor went viral online.

Her sister, the celebrant has since dispelled the scuffle saying Seun’s anger was against Sanwo-Olu’s orderlies who shoved his wife at the event.

The public was not astonished by Seun’s action, as he has always expressed his odium for the government just like his father, the late Afrobeat legend.

Actress Rita Daniels who gave her young daughter Regina away in marriage to 60-year-old billionaire Ned Nwoko has found herself a young lover.

Rita Daniels tied the nuptial knot with her disproportionately aged lover in a secret traditional wedding in Delta State during the week.

Although details of the event and persons in attendance are still sketchy, it was gathered that her daughter Regina Nwoko and her aged son in-law Ned Nwoko were not in attendance.

The actress’s marital preference set the internet ablaze as the public was shocked about her decision to settle for a younger man while she gave her daughter off to an older one.

Another secret wedding was held but this time it was Instagram comedian Abdulgafar Ahmad Oluwatoyin popularly known as Cute Abiola who privately performed traditional marital rites with his girlfriend at Ogbomosho, Oyo State on Friday.

This came as a shock to his Fans and followers who thought the comedian who is also a Nigerian Navy personnel was engaged to fellow Instagram influencer Adedamola Adewale popularly known as Adeherself.

The duo, Cute Abiola and Adeherself posted steamy images which seemed like pre-wedding pictures in December, 2020.

However, Adeherself clarified that they never dated while congratulating the comedian on her Instagram story.