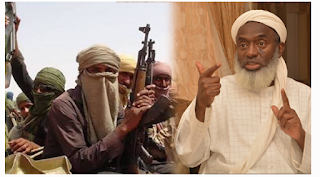 Parents and relatives of abducted students of the Federal College of Forestry Mechanisation in Kaduna claimed they paid N800,000 to a Fulani man brought by Sheikh Gumi to negotiate the release of the kidnapped victims.

The parents stated this in an interview with Roots TV on Tuesday, revealing that they visited Gumi’s house for a meeting where he demanded they pay N8000,000 to the Fulani man.

About 39 students were abducted from the college on 11 March 2021. After spending 56 days, 29 students have yet to be released as their abductors demanded N500 million ransom.

A parent said the Fulani man collected the N800,000 contributed by the parents, insisting the money was for transportation.

“We have been going for meetings, committee meetings, and so on. We were taken to Gumi’s house for a meeting. He asked us to meet a certain Ahmed ( I don’t know his surname); then he visited a Fulani man,” she said.

The parent added, “We contributed money, almost N800,000. We gave it to the Fulani man. He told us that was just for transportation. I cried, I told him I am a widow and I don’t have a husband. I am only training my son to help me tomorrow.

“I begged him. He said it was none of his concern. The person is a Fulani man. He was invited from an office in Kaduna. We tried begging him. He insisted that we must pay about N 500 million.”

Another parent explained her ordeal, saying, “Initially, they were after the government paying that money, N500 million. Anytime they called, like me in particular, they kept saying ‘Madam, go and talk to the government to pay the money!’ All I kept telling them was that I am a widow.

“At the end, they started calling that how much have we gathered. I told them we are poor people. Most of us are widows, and even those who are not widows (they) are petty traders.”

Continuing, the woman stated, “We told them all we are trying to do was get the government to assist us. Then we were asked if we will abandon how children if the government failed to pay, then they told us they had already killed.”

Abdullahi Usman, whose seven-month pregnant wife was also abducted, lamented the government’s lackadaisical attitude toward them.

“There is no effort made by the state government. The minister (of the environment) went to America to spend Sallah with his family. So, they do not care about us,” he said.