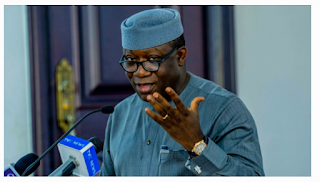 Kayode Fayemi, Ekiti State governor, has charged Nigerians youths who are dissatisfied with the performance of the All Progressive Congress to organise and kick the APC out of power in the next elections.

Mr Fayemi, who was one of the speakers at this year’s edition of  The Platform,  said citizens should stop agonising and start organising to kick APC out of office in the coming elections.

Before now, Mr Fayemi, who is also the chairman of Nigeria Governors’ Forum, had admitted that his party has failed to deliver on its promises to Nigerians under the watch of President Muhammadu Buhari.

Acknowledging the validity of #EndSARS demands, Mr Fayemi said #EndSARS protest against police brutality is the reason judiciary panel are set up in states across the country.

“By the way, everything they fought for, the five points, are laudable. Even the federal government acknowledged that the issues of police brutality that the young ones raised have to be addressed. That is what has led to some of the tribunals that have been sitting in states across the country,” Mr Fayemi said.

He further said citizens who are unhappy that the historic #EndSARS protest against police brutality did not result into a regime change should start organising to kick APC out in an election.

“I agree with you that some of them might have left with the feeling of despondency or frustration that the demand to end to police brutality never got to regime change. But even if your search is for regime change, in a democracy there is only one way for regime change,” Mr Fayemi said. “You can work towards it. Another election is going to come, if you don’t like what the APC is doing, organise. Stop agonising. Organise against the party. Link up with others who are organising and then kick the butt of the APC out of office. And out people you think would do better.”