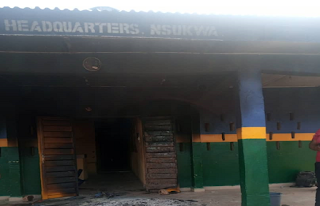 It was learnt the attack, which occurred around 1.00am on Sunday, led to collapse of parts of roof of the police station.

Details of the attack were still sketchy as at press time.

The Nation gathered an uneasy calm has enveloped Nsukwa, a small agrarian community, following the attack with residents fleeing to neighbouring communities.

The Nation learnt the gunmen, who arrived on foot, launched the attack from a thick forest behind the ill- fortified station.

Although identities of the slain policemen have not been declared, sources in the community claimed they include an Inspector, sergeant and a Corporal.

The fate of a lone detainee at the station remains unknown as at press time.

Sources in the community said that there were sporadic shootings that lasted for about one hour.

Several policemen have been killed in attacks in different parts of Delta State but no police station has been razed until this.