Traffic violators major cause of accidents on Lagos-Abeokuta expressway: FRSC - The Naija Weekly

Traffic violators major cause of accidents on Lagos-Abeokuta expressway: FRSC 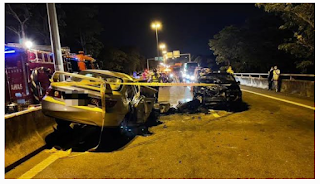 The Federal Road Safety Corps (FRSC) in Ogun has identified driving against traffic as a major challenge confronting its personnel on Lagos-Abeokuta expressway, the Itori Unit Commander, Shamaki Yerima, revealed on Sunday in Ota.

According to Mr Yerima, these incessant cases of driving against traffic and flouting of traffic regulations by drivers, especially at the Itori axis has become worrisome for the command.

He said that there was a need to check the myriad of driving against traffic to ensure the safety of lives and property area.

“There is the need for drivers to change their orientation about the use of road so that the highway could be safer for other motoring public.

“Until drivers change their wrong way of using the roads, there will always be continuous negative effects which sometimes lead to loss of lives,” he said.

Mr Yerima noted that the fact that some portions of the roads were bad did not grant motorists the liberty to break traffic regulations.

He enjoined them to change their attitudinal behaviour in order to minimise crashes on the highway.

The unit commander, however, said that the FRSC personnel had been deployed to areas where motorists were fond of driving against traffic.

He added that erring drivers would be arrested and prosecuted with stiffer punishment.

In many parts of the federation and the Federal Capital Territory, those guilty of driving against traffic are security personnel.