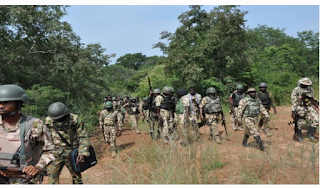 Men of the Nigerian military engaged bandits in a gunfire, foiling attempted abduction of a popular herdsman and his family in Igabi Local Government Area of Kaduna State, Samuel Aruwan said on Friday.

In a statement made available to the press, Mr Aruwan, the state’s Commissioner for Internal Security and Home Affairs, said one of the brigands was killed during the exchange.

“Troops and police operatives in the early hours of Friday, May 7, engaged armed bandits in the Rigachikun axis of the Kaduna-Zaria dual carriageway in Igabi LGA,” the commissioner narrated.

“The bandits had earlier attacked a Fulani settlement belonging to a popular herder, Damina Kukumake, at Kukumake village.

“The bandits who kidnapped some members of the herder’s family, also rustled several cattle and were making their escape when security agencies received a distress call.

“The security personnel comprising troops of the army and air force, as well as police operatives, made contact with the bandits as they attempted to cross the Kaduna-Zaria expressway.

“In the fierce gun duel, a notorious bandit was neutralised while many other bandits escaped with bullet wounds.

“During the gunfight, the abducted hostages escaped and the rustled cattle scattered.

“After a check, the remaining cattle were recovered as some were confirmed to have been killed in the skirmish.”

Mr Aruwan said the troops and police operatives were now combing the general area in a clearance operation.