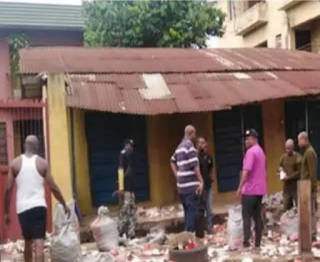 A fully loaded truck with cartons of bullets yesterday morning fell into a ditch in Onitsha, Anambra State, spilling its content in the street of the commercial city.

THISDAY gathered that the incident happened I the morning on Awka Road as worshipers made their way to church.

A source, who confirmed the incident, said: “The truck fell, and the entire streets were filled with bullets. Some boys even scooped some with their hands and ran away, before security agents arrived at the scene.”

The source said the driver of the truck and his truck conductor abandoned the truck after the accident occurred, disappearing into thin air.

According to him, “The incident attracted heavy security presence in the Awka Road area and Shoprite axis of the city this (yesterday) morning. The police first arrived in the area before soldiers came. They later brought a tipper, and used pay loader to scoop the scattered bullets into the tipper.

“The tipper had to make three trips to carry all the bullets to unknown destination before the truck was finally towed out of the ditch.”

When THISDAY contacted the state Police Public Relations Officer, DSP Tochukwu Ikenga, he denied any knowledge of the incident.

He said: “I have received a report of a fallen truck in that area, but I was not told the content of the truck. If I get to know anything new, I will let you know.”