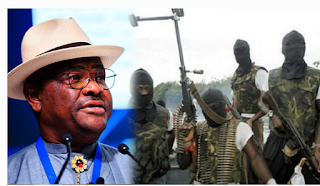 No fewer than four police officers have been killed in Rivers, in an attack that spanned late Friday till the dawn of Saturday, sources familiar with the development have told Peoples Gazette.

A community source who pleaded anonymity due to the grave security implications of the story told The Gazette Saturday morning that after the gunmen had attacked the officers at Rumuji in Emohua Local Government Area, they drove further and attacked officers at the police checkpoint in Omudioga road on Saturday morning.

The Gazette could not immediately understand how the gunmen were able to move freely against their targets when the state had been on a dusk-to-dawn curfew.

State police spokesman Nnamdi Omoni could not be reached for comments on the statistics of victims but Punch reports that seven persons were feared killed during the attack.

Another three police officers were killed at the C-4-i checkpoint along the East-West Road. The checkpoint is used by C-4-i officers – a special police unit recently re-launched by the state government to strengthen the state’s security and protect citizens and properties.

But the Nation said two officers were killed and two patrol vans were destroyed along the East-West Road of the state.

The news outlet also reported that the hooligans wore two different security uniforms in a Hilux van in a bid to deceive the security officers on duty.

The state police commissioner Friday Eboka has gone to visit the affected areas, The Gazette learnt.

Meanwhile, The Gazette has also learnt that there was sporadic shooting at the Choba/Ozuoba axis late Friday.

Details of the shooting as relayed by some commercial drivers and residents are still sketchy.

The Gazette had earlier reported that three Customs officers were killed alongside an unspecified number of police officers at Isiokpo Omuanwa Road in Ikwerre Local Government Area of the state.

The Gazette learnt at least four soldiers were killed in an attack Sunday night at Abua/Odual Local Government Areas of the state, in what appears like coordinated attacks on security forces by unknown gunmen.