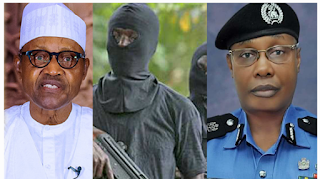 President Muhammadu Buhari has described as ‘madness’ the continued violent attacks by unknown gunmen in the South-East and South South on law enforcement officers, especially policemen.

“The President, in addition, takes this opportunity to condole with all who lost family members due to what he described as the ‘madness’ going on in parts of the country,” a statement by Mr Buhari’s media aide, Garba Shehu, said on Sunday.

The troubled president also called on all local leaders to talk to their youths and warn them against inciting and instigating violence.

Security operatives have had to deal with UGM attacking security facilities, including prison facilities, lately amid a protracted fight against bandits and Boko Haram.

“If we attack institutions guarding us, who will protect us in future emergencies?” added Mr Buhari.

Meanwhile, as Muslims in Nigeria join others globally in preparations towards Eid Al-Fitr, a day celebrated to mark the end of Ramadan, Mr Buhari has announced that his family, personal aides, and service chiefs who choose to remain in Abuja will congregate in full compliance with COVID-19 protocols at the forecourt of the Presidential Villa to observe the Eid prayers at 9:00 a.m.

The statement added that there would be no traditional Sallah homage to the president by the religious, community, and political leaders after the prayer.

“As was the case last year, the president encourages such leaders to be content with modest celebrations at home in view of the pandemic,” Mr Shehu said.

The media aide also quoted the president thanking the Islamic clerics and other religious leaders who had been praying for the nation’s wellbeing and its people.