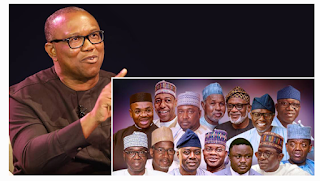 Peter Obi, a former vice presidential candidate of the Peoples Democratic Party in 2019, says it is unfortunate that governors go to Abuja every month to collect money made from crude oil sales from the federal government.

He asserted that restructuring Nigeria would boost the nation’s economy and end insecurity.

Mr Obi said this on Tuesday at the fourth Adada Public Lecture organised by the Association of Nsukka Professors (ANP) at the University of Nigeria, Nsukka (UNN).

He noted that restructuring would move governors to look inward to make their states productive, adding that it offers an opportunity to set up state, local, and community police to tackle crime within their areas.

“It is unfortunate that some governors believe in going to Abuja monthly to get federal allocation from proceeds of oil. They have forgotten the price of oil in the international market has depreciated and will continue to depreciate,” stated the former Anambra governor.

Speaking further, he said, “No developed country in the world depends on crude oil, but they invest in their children, agriculture and encourage small and medium enterprises by giving out soft loans and other incentives.

“There is urgent need to restructure the country for the economy to grow to the desired level.”

According to him, calling for restructuring is a ploy to divide the country.

“Rather, it should be seen as a move to build the ailing economy and restore adequate security in the country,” said Mr Obi.

“Restructuring the country will bring out the comparative advantage of every state, and our natural resources that are lying waste will be fully harnessed to boost state economy,” he explained.

Mr Obi added, “In the 1960s and 1970s, agriculture was the major foreign exchange earner for the country. In the North, we had groundnut pyramid, in the West, we had cocoa, and the East had palm oil, and Nigeria was among the best economies in the world.”