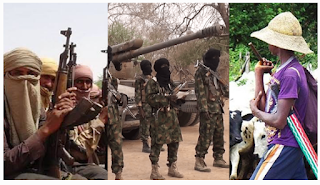 US. Ambassador to the United Nations, Linda Thomas-Greenfield, has emphasised the need to provide adequate support for Nigeria, following the growing insecurity in the country’s northern parts.

Ms Thomas-Greenfield, who spoke at a press briefing held ahead of a UN Security Council meeting, said the issue of food insecurity in northern Nigeria required U.S. attention.

The North has been plagued by food insecurity due to the Boko Haram insurgency, bandits’ attacks, and the farmers-herdsmen crisis.

Asked how the U.S. mission to the UN could save Nigeria from starvation and use of food as a war weapon, the diplomat assured that the American government’s tackling the challenge was a major priority.

She recounted that food insecurity was a focal point at the presidency of the Security Council last month as it discussed the impact of man-made disasters on food and security were discussed.

“So this is a very high priority for us,” she noted. “We will be actively engaging in the discussions that will take place later in the year. we know that the situation in northern Nigeria is one that we need to focus attention on.”

The American ambassador further stressed that food insecurity led to conflict in other parts of the world and vice versa.

Boko Haram insurgency in Nigeria’s North-East has resulted in food insecurity and displacement as most displaced families rely on other communities for food and basic needs.

Series of attacks and looting have hampered the activities of farmers, thereby leading to loss of harvests and reduction in purchasing power.

A report recently published by the WFP indicated that 8.6 million people are food insecure in northeast Nigeria, 1.9 million people are internally displaced in Borno, Yobe, and Adawama, while 300,000 children are acutely malnourished.