We are heading for secession: Miyetti Allah - The Naija Weekly

Home News We are heading for secession: Miyetti Allah

We are heading for secession: Miyetti Allah 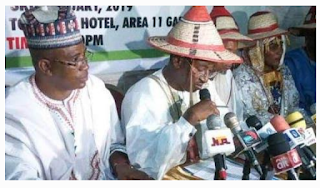 Seventeen governors in the southern parts of the country had in a communiqué at the end of a meeting in Asaba banned open grazing and nomadic pastoralism across the South.

The meeting held regardless of their political, ethnic and religious differences and the focal points were insecurity occasioned by Fulani herdsmen’s attacks, banditry, secession among issues.

The nation has witnessed escalated attacks by Fulani herdsmen across the country that have not only caused loss of lives and properties, but has also heightened threats to food security and national unity with secessionist groups hinging their call on Fulani oppression.

However, the Bauchi State chapter of MACBAN faulted the governors’ decision on open grazing, asking the Fulani people to leave the South.

“This is a simple calculation. We are heading for secession. The rulers are no longer interested in the people. If some people are banned from open grazing, there is nothing more. Fulani people should move out from there. It is very simple,” Guardian quoted MACBAN Chairman, Sadiq Ibrahim Ahmed as saying.

Mr Ahmed described the Fulani people as “peace lovers”, alleging that inhumane activities such as kidnapping, robbery, and banditry began in the southern part of the country.

“Must we transport the cattle there?” he queried, stating that “I have said it before. We have an option of breeding our cattle here (North). We are peace lovers. Let them come and buy from us. It is some people’s fault.

“The southern governors can do that. There is no problem, let them do what they want. If the northern governors feel like, they can also do it too (banning open grazing)…”

Mr Ahmed further described President Muhammadu Buhari as a “figure head”, asking him to resign and be replaced with a leader.

He said: “The President is there as a figurehead. He doesn’t know what he’s doing. He is not controlling anybody. In our country now, everyone does what he feels like. The country is already moving apart. Where is the central government, if some governors can meet and take decisions that are against the Constitution…?”

Mr Ahmed further recommended that the solution to insecurity is for the “President to step aside or for Nigerians to put heads together and elect a credible president in 2023, a leader with focus and competence. Nigeria should get a leader with a good example, who is ready to sacrifice his life for his subjects.”

Also reacting to the ban on open grazing, the National Secretary of MACBAN, Baba Othman Ngelzarma challenged the northern governors to meet with their southern counterparts and work out a solution that will be generally acceptable.

“We can’t ignore the unanimous demand of the entire governments of the south on a particular issue,” Mr Ngelzarma told The Nation on Saturday.

“But the northern governors need to speak with their southern counterparts so that they can come up with a solution that is generally acceptable,” he recommended.

“We as an association believe settlements for the pastoralists will be the only solution that will solve the farmers/herders conflicts in the country.”