Youths advise South-East governors on how to tackle UGM 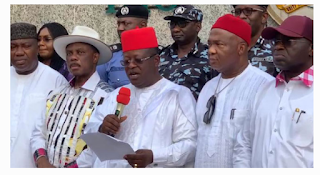 South-East youths have called on their governors to activate the community policing system to tackle the menace of unknown gunmen and improve the security of lives and property in the region.

Chukwuma Okpalaezeukwu, Chairman of Ohaneze Ndigbo in Anambra and leader of the coalition, made the call in a communiqué issued at the end of its meeting in Awka on Thursday.

He called on the South-East governors to ensure that peace return to the region.

The youths also recommended a quarterly interface between the governors and the youth stakeholders for regular review of the security and other concerns of the zone.

They aligned themselves with the resolution of the southern governors meeting held in Asaba recently and called on them to provide legislative backing to enforce the decisions.

They appealed to the federal government to de-escalate tension by pulling out all military operations in the region.

“We condemn in totality the wanton destruction of lives and properties in the South-East and call on the perpetrators of these criminal acts to desist from such forthwith and seek for a proper means of airing their grievances.

“We call on the South-East governors to review the laws of their various state security council committee to include critical youth stakeholders and also fully implement, support, and fund community policing committee as constituted last year,” the communique stated.

The youths also called for full implementation of the recommendations of the #EndSARS panel reports and promised to convene an all-important ‘Youth Security Stakeholders Summit’ soon.

They called on Igbo businessmen to complement governments’ efforts in the South-East by investing in the region to curb the unemployment crisis among youths.

“We further call on the South-East governors to adopt business-friendly policies to attract Ndigbo’s investments back home in Ala-Igbo, and urge our Igbo businessmen to consider and invest massively in South-East,” the youths explained.