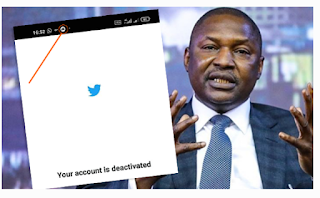 Attorney-General Abubakar Malami’s screenshot shared on Facebook listed a major cryptocurrency platform amongst an array of icons on his mobile phone.

Mr Malami shared the screengrab on Tuesday evening to confirm to Nigerians that he had deactivated his account in line with Buhari regime’s controversial and illegal ban on Twitter.

Mr Malami had threatened on Saturday that Nigerians still using Twitter after a press release announcing a ban on the social media platform would be arrested and charged, even though no law prohibiting such action has been enacted in the country.

Although there were already debates about whether or not Mr Malami’s deactivation of his Twitter account was a violation of the ban order in itself, since he clearly has had to open the platform on his mobile in order to deactivate it, some people are also seeing potential illegality from the crypto icon on his mobile.

The administration had previously banned all trading in cryptocurrencies in Nigeria, saying it was being used to launder money, fund terrorism, amongst other corrupt and nefarious activities.

Banks were also banned from accepting cryptocurrency transactions while some bank accounts that had been used to trade crypto in the past were frozen or restricted.

Although the CBN, which imposed the ban, said it was working to review it, no new guidelines authorising Nigerians to trade in cryptocurrency have been issued.

It was unclear why the attorney-general was running a crypto account. The Nigerian government does not pay salaries in crypto and the AGF is forbidden by law from conducting commercial activities for himself.

Neither Mr Malami nor his spokesman returned a request seeking comments about the crypto icon on his mobile phone Tuesday night.