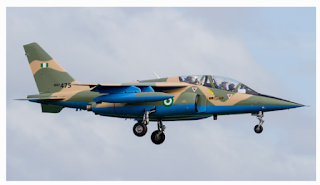 A Nigerian Air Force Alpha Jet has shelled a wedding venue, killing some wedding guests at a remote community in Niger State, PRNigeria reports. The airstrikes were targeting bandits and insurgents in the area.

The airstrike in which some armed bandits and cattle rustlers were killed took place at Genu town in Niger State, the blog reported on Saturday, adding that “One of the bombs allegedly strayed at a wedding party in an adjoining village.”

“We saw the small aircraft dropping bombs from afar on the location of fleeing bandits and one of the explosives hit a wedding event in Argida Village.

“Two villagers were also killed, unfortunately. We gathered that several others, who were guests at the wedding feast, sustain injuries,” PRNigeria reported citing a witness.

In April, the Air Force in an airstrike killed some Nigerian soldiers, mistaking them for insurgents.

A soldier in a video published by Peoples Gazette could be seen reporting the incident calling for help for survival of the bombardment.

The Gazette has reached the Air Force for comments about the soldiers’ claim.