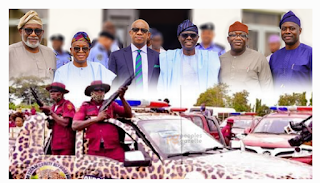 A Yoruba socio-cultural group, Majeobaje, has accused South-West governors of politicising Amotekun and maintains that the security outfit across the region is disunited.

According to the group, the region needs a united and depoliticised Western Nigeria Security Network (Amotekun) to protect life and property.

Akintayo Akin-Deko, the group’s convener, told journalists this after a meeting, tagged ‘Majeobaje Roundtable,’ held on Sunday in Ibadan.

Mr Akin-Deko added that from the extensive deliberations at the meeting, many expressed their displeasure at the operations and management of Amotekun.

“We can see the politics in the whole management of Amotekun. The governors have their political leaders and agenda. Yorubaland needs a united and depoliticised Amotekun.

“So we are not happy the way it is being run, and we are going to keep pressure on the governors, on our leaders to make sure Amotekun works as an independent unit,” said Mr Akin-Deko.

The convener stressed that Yoruba groups needed to unite to ensure they speak with one voice and protect their territory from invaders.

“If you are Fulani and you are a law-abiding citizen of Yorubaland, we are honour-bound as Omoluabi to protect you with our own lives.

“Our anger is against non-Omoluabis, illegal herdsmen, and anybody who try to destroy the welfare of the Yorubas. What happened in Igangan was obviously the death of innocent people in Yorubaland,” he explained.

The convener added that the group intended to evolve self-defence measures towards finding out who perpetrated the Igangan massacre and get justice for the victims.

He further noted that the measures would also bring relief to the children of the victims, their widows and help rehabilitate the affected communities.

Oladokun Oladiran, the convener of Igangan Development Advocates, commended the Majeobaje group for bringing other groups in Yorubaland together to forge a united voice.

“I hope that we have some governmental stakeholders in this gathering who have listening ears and ready to act.”

He added, “My take-home lesson is that the onus is on us to protect our territories and families.”