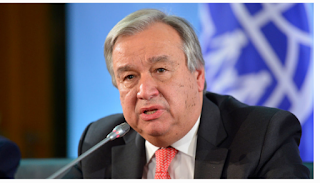 Antonio Guterres variant spreading fast among younger population has secured a second five-year term as the Secretary-General of the United Nations General Assembly.

The appointment was made by the 193-member United Nations General Assembly on Friday. Mr Guterres will begin his second five-year term on Jan. 1, 2022.

Mr Guterres began his tenure as the ninth Secretary-General of the UN on January 1, 2017 and will be ending on December 31 this year.

Mr Guterres had previously served as the United Nations High Commissioner for Refugees between June 2005 and December 2015.

In May, Mr Guterres made his case for a second term to UN Member States during an informal interactive dialogue convened in the General Assembly Hall, the Security Council then began deliberations to select the candidate by June.

In January, Guterres had confirmed that he will be seeking a second five-year term as chief of the world organisation.

In accordance with Article 97 of the UN Charter, the appointment of the Secretary General is made by the General Assembly, on the recommendation of the Security Council.