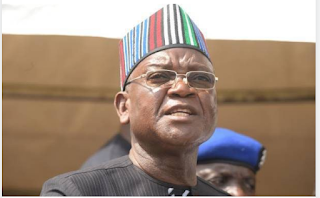 Benue State governor, Samuel Ortom, has again come hard on the All Progressives Congress (APC) controlled Federal Government of Nigeria, saying the party has failed Nigerians because it lacks capacity to lead the country.

He made the disclosure on Thursday at Moniya, the headquarters of Akinyele Local Government Area, Ibadan, Oyo State, during the commissioning of a 65-Kilometre Moniya-Ijaye Ojutaye-Iseyin Road that was reconstructed by Governor Seyi Makinde of the state, as part of activities, marking his second anniversary in office. The project was flagged off on November 5, 2019 and the commissioning was attended by eminent personalities, including the Olubadan of Ibadanland, Oba Saliu Adetunji, Aje Ogungunniso I.

Ortom, who was invited by Makinde to commission the road, however, assured Nigerians that the Peoples Democratic Party (PDP) would rescue the country from what he described as failures of APC in the areas of economy, security and so on by 2023.

His words: “In 2015, the mantle of leadership was given to the APC. But from all indications, it is clear to every Nigerian that APC does not have capacity to deliver. Go and check, economically how much was a dollar to a naira when power was given to APC in 2015.

“What was the nature of our security problem in this country when APC took over power in 2015? What was our social relationship in this country? Politically too, where are we, when we have all these challenges all over the country, not just in one section of the country?

“But let us work hard, and as we pray, whether as Muslims or Christians, let us also apply work because faith without work is death. Let us work hard so that come 2023, by the grace of God, we shall change the change.”

Ortom also said he stands for the opressed, and he has always been the voice of the opressed like the Yoruba nation right from the era of Action Group in the defunct Western Region of Nigeria, adding that he seeks for justice, equity, and fairness.

Ortom, who asserted that the PDP is committed to unity of Nigeria, said: “I want to say that we remain committed to the unity of our country, Nigeria, and that is why my brother (Governor Makinde) invited me here(Ibadan). The PDP is working despite all the security challenges and economic challenges in this country, the PDP has demonstrated leadership. That is why we are commissioning this road today. It is amazing.

“Today, I am here in Oyo State. My brother (Governor Makinde) was in Adamawa State, a PDP controlled government, to commission projects, and to lay foundation. Go to Rivers State, everyday what you see is laying of foundation or commissioning of projects. Go to Bauchi State, go to Sokoto, PDP controlled States, you will see developmens. That is what leadership is. And that is what the people of Nigeria are yawning for.

“I commend my brother (Governor Makinde), within the space of two years, we are here to commission, amongst others, a 65-kilometre of roads, duly asphalted with a guaranty of 20 years.

“I believe and trust, for the person of Engineer Seyi Makinde, whom I know, will do more for the people of Oyo State. I commend Oyo people for giving him the backing, for supporting him. As we drove from the Government House to this arena, market women and the public generally were waving in appreciation and in applause to our governor. We commend you and we congratulate you.”

Ortom, however, warned Governor Makinde: “Don’t ever contemplate on leaving your people, work with them, do what they want, feel their pains, share their pains, help them and give them leadership that will lead them out of their pains. We want to appreciate all of you and to say that our prayers are with you.

“Let me once again, call on the APC Federal Government to rise up and give leadership because our people are on pains. From North East, North West, North Central, South South, South East to South West, everyone is faced with security challenges. And without security, there can be no meaningful development, except in PDP controlled states.

“I have also invited some of my colleagues, and I will invite my brother too to commission projects in my own state, because we are performing, despite all odds. So, I appreciate all of you for this privilege. Let us not lose faith in the project Nigeria. We have no other country other than Nigeria. Let us work together to surmount this challenge that we have today.”

In his address, Governor Makinde, who thanked Ortom for honouring his invitation, and commiserated with him on the death of his Senior Special Assistant on Security, Christopher Dega, said: “What we have done here is the total reconstruction of this 65km road at 9.9 billion Naira and this translates to 152 billion Naira per kiliometre. So again, based on science, data and logic we made the best decision overall.

“Of course, we understood the economic significance of this road not only to individual residents but also to the growth of commerce and industry. The Moniya-Ijaiye-Iseyin Road is the link between Ibadan and Oke-Ogun, Oyo State’s food basket. This road also hosts the once moribund Pacesetter Quarry and Asphalt Plant; not only have we resuscitated the plant, but it is already producing asphalt that we use in the building of our roads here in Oyo State.”