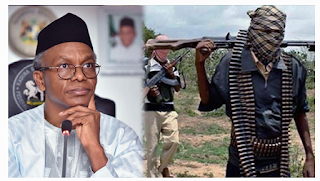 The Commissioner for Internal Security and Home Affairs, Samuel Aruwan, disclosed this in a statement issued in Kaduna on Sunday.

The prompt action of the troops of ‘Operation Safe Haven’ (OPSH) stationed in the Southern Kaduna area, according to Mr Aruwan, stopped the bandits from wreaking more havoc.

“The bandits went on to vandalise the home of a resident of the village.

“They also damaged a nearby vehicle before storming a telephone charging shop belonging to another person, carting away telephones and chargers,” he said.

The commissioner added, “One resident of the village was injured by a bullet during sporadic shooting by the bandits. She was evacuated to a nearby medical facility for treatment.”

Mr Aruwan further stated that Governor Nasir El-Rufai received the reports of the attacks with sadness while thanking the troops for their prompt response, which halted the attack and prevented its escalation.

The statement said investigations into the attacks were in progress.

A spokesman for the police command in Kaduna, Mohammed Jalige, confirmed the incident, revealing that the attacks occurred about 3:00 a.m. on Sunday.