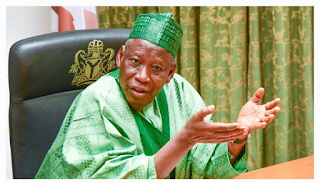 Bandits opened fire on the convoy of Kano State Governor, Abdullahi Ganduje, on Tuesday night, injuring some policemen attached to the governor.

This comes barely after Muhammad Ahmad, a lawmaker representing Shinkafi Constituency in the Zamfara State House of Assembly was killed and his son and driver kidnapped as they journeyed from Katsina to Kano.

Mr Ganduje’s convoy was attacked on his way from Gusau, Zamfara, where he attended defection rally of Bello Matawalle, who recently joined the All Progressives Congress, Daily Trust reported on Wednesday.

Citing a source in Kano State government house, the newspaper reported that Mr Ganduje was not in the convoy but three policemen in the convoy were injured as a result of the attack.

“Government House sources confirmed the attack but said Ganduje was not in the convoy when they encountered the gunmen.

It was gathered that Ganduje joined the convoy of his Jigawa State Counterpart, Abubakar Badaru, after the mega rally in Gusau,” Daily Trust said.

“At least three policemen sustained injuries in the attack which happened after the convoy was making its way to Kano from Zamfara State, where a mass All Progressives Congress (APC) rally held on Tuesday.”

On June 13, Mr Matawalle had lamented the spate of killings by bandits in Zamfara state, saying “things are getting worse by the day.”

Mr Matawalle, who has embarked on dialogue with the bandits recently, said efforts to dialogue with bandits have proven abortive.