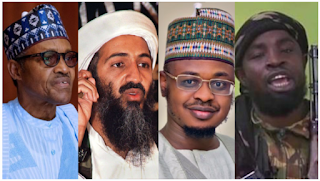 Isa Pantami, minister for communications and digital economy, Thursday said insecurity in the country is hyped to bring down the government of President Muhammadu Buhari.

Mr Pantami had in the past condemned the killing of  Boko Haram militias, arguing that they are his “Muslim brothers”, Peoples Gazette had extensively reported.

For over a decade, Boko Haram has killed over 30,000 and displaced over three million persons in northeastern Nigeria, while also kidnapping school children in large numbers.

But speaking at a stewardship programme organised by APC professional forum, according to Sahara Reporters, Mr Pantami said insecurity in the country is hyped to bring bring the government of Mr Buhari government down.

“President Muhammadu will be judged by security and other achievements but the issue of security is not going to be an artificial security situation in Nigeria.

“I want to explain this very well,” Mr Pantami said. “Those who are trying to take down President Muhammadu Buhari through the back door will not succeed – you are hyping up for people to know that there is insecurity to bring down the government of APC and we will bring them to book Insha Allah.”

Mr Pantami also said that the Buhari regime has brought up policies to tackle insecurity  in the country, adding that SIM registration is one of such policies.

In the run up to the 2015 general elections, Mr Buhari anchored his campaign promises on combating insecurity.

But since he assumed office in May 2015, however, insecurity in the country has taken a frightening trajectory with Nigerians witnessing increased farmers-herders conflicts, killings by bandits and mass abduction of students  for ransom.