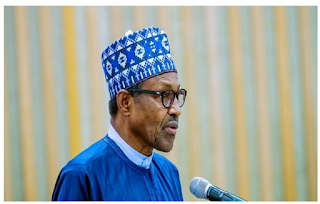 President Muhammadu Buhari on Saturday stood up to advocates of restructuring and secession in the country, saying that they were asking for the impossible.

He also said that those that were agitating for restructuring or secession were not only naïve but “mischievously dangerous”.

The President declared that his government had no time for any obscure conference; a veiled reference to calls for a constitutional conference.

“You are telling us to dissolve a system and call for an obscure conference to come and discuss how we can move forward as a nation. That can never be done and no country will agree to that,” Buhari said in a message to the launch of the Kudirat Abiola Sabon Gari Peace Foundation in Zaria, Kaduna State.

The President, who was represented as Special Guest of Honour by the  Executive Secretary, Revenue Mobilization, Allocation and Fiscal Commission, Alhaji Mohammed Bello Shehu, said those calling for the balkanization of Nigeria were only doing so to destabilise his government.

“There is no government in the world that will cede their authority to the people that are not elected,” he said.

He wondered what the advocates of restructuring wanted precisely, saying: “Those who are discussing restructuring, my question is what are you going to restructure?

“If you ask many Nigerians what are they going to restructure, you will find out that they have nothing to talk about.

“It is okay to demand for restructuring, renewal of constitution, but what is most important now is how can Nigeria states make local governments functional? How can Nigerian states make the judiciary independent?

“Rather, we ask Nigerians to put focus on putting pressure on National Assembly members to make sure that the local government autonomy as enshrined in our constitution is respected and implemented.

“So, if that were to be done, some of the issues like insecurity, you will find a situation where local government chairmen, in collaboration with traditional rulers, will form a chain a communication to figure out what is really happening.

“So, those who are doing that (agitating) should go back and meet their representatives in the House of Assembly and ask for whatever amendment of constitution. Due process should be followed.

“The other issue is that those who are calling for restructuring and conference or what they call ethnic nationality, if you go to Southern Kaduna, Taraba, who is to represent them? We have different combination of ethnicities in many states.

“Even Kano and Kaduna Igbos have properties. The same goes with Yorubas. There are Fulani in Port Harcourt. So those calling for whether separation or restructuring, some of them I will say they are very naive or even mischievously dangerous.

“Those agitating for secession are ignorant of war and its consequences, because Nigeria is a dominant force in West Africa.

“My appeal to each and everyone here is to try and educate their children. We are better as a nation. There is no way we can be separated.

Buhari in his Democracy Day broadcast last week had said government was not unaware of misgivings causing national discontent in different parts of the country, including allegations of marginalization and constitution amendment and said efforts were on to address such misgivings.

He said: “In responding to the challenges that this period imposes on us, Government also recognizes the need to acknowledge notions of marginalization and agitations for constitutional amendments among various segments of our population.

“While this government is not averse to constitutional reform as part of our nation building process, everyone must understand that the primary responsibility for constitutional amendments lies with the National Assembly.

“This body which, as I said, is the arm of government responsible for constitutional changes has concluded the preliminary stages of amending and improving our constitution in a way that the majority of Nigerians will be happy with.

“Government is, however, willing to play a critical role in the constitutional amendment process without usurping the powers of the National Assembly in this regard.

“As a nation we have come very far from where we started and we are getting incrementally closer to where we ought to be.

“Overcoming the present challenges is but one of a necessary process that we have to undergo as a nation so that we can come out stronger.”

Kudirat was born in Zaria.

Also speaking at the event, Kudirat’s son, Alhaji Jamiu Abiola, said the death of his parents would be in vain should Nigeria or its democracy collapse.

Abiola said the foundation was floated to work for peace and unity of Nigeria in the face of agitations for secession.

He said it would work against the forces trying to bring Nigeria down, adding that creation of Nigeria by God was not a mistake and the country has gone too far as a united nation to break up now.

He said: “I chose to float this foundation now, 25 years after my mother’s demise, because of where we are now as a country.

“Where we are now as a country is very dangerous. We have a democracy but we have fake news and so many things working towards destroying the country.

“So, the same way these forces against the country, we also have to establish forces of our own to work for the country. We should get more forces positively than the negative forces.

“So, this is the time, because if things go wrong and democracy does not work, it means my father and my mother died for nothing, and there is no way I can let that happen.

“So, we are encouraging people to join our course so that we can recover quickly.

“This government has good intentions. They want to do well, but they need us to participate. So, we are drawing the line to say we either move forward or backward, and I am sure Nigerians want to move forward.