Buhari begs Nigerians: Be fair to me - The Naija Weekly

Home News Buhari begs Nigerians: Be fair to me

Buhari begs Nigerians: Be fair to me 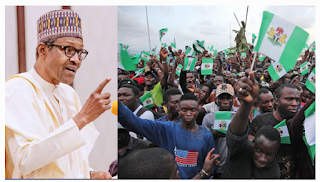 He accused Niger Delta militants of being responsible for financial woes Nigeria is experiencing from oil revenues.

The president stated this on Friday in an interview with NTA.

Explaining his point, the president said, “I want Nigerians to be fair to this administration. They should reflect seriously the time we can, especially relative to North-East and South-South, where are we now?”

“Resources: what are we producing? What was the administration before me producing? 2.1 millions barrels per day for an average of $100 per barrel.”

He added, “When we came, somehow, the militants in the south south were unleashed to this administration and production went down to half a million barrels per day and then, again, the oil market collapse.”

The president had on Thursday in a separate interview with ARISE TV likened secessionist group Indigenous People of Biafra (IPOB) to “a dot in a circle” that will not have “access to anywhere” even if they achieved their aim of secession.

When asked by the TV station, “what will be the Buhari legacy,” the president said Nigerians should discuss it because he would not like to state his legacy himself.

“I will allow Nigerians to discuss it,” said Mr Buhari matter-of-factly. “I wouldn’t like to say it myself.”

While leaving it to Nigerians to talk about his legacy, he pleaded, “I hope Nigerians will be fair to me. That’s all I need.”

The worsening insecurity in the South-East characterised by incessant violence between security agencies and IPOB has resulted in many deaths and destruction of public facilities.