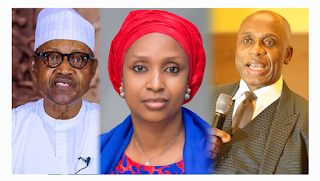 Mr Amaechi, in an interview with ARISE TV, said Ms Bala Usman was asked to step aside pending the completion of the investigation on NPA.

“I’m not aware that Hadiza was actually suspended. What I suspect is that she was asked to step aside to enable investigations to be carried out on NPA, not on her,” Mr Amaechi pointed out.

Further explaining, she stated, “We are investigating NPA. At the conclusion of the investigation, all the report will be forwarded to the president who will make a determination on the way forward.”

Discarding claims of his involvement with the suspension, Mr Amaechi, “I’m not the president. I don’t have such powers. That power resonates on the president.”

Peoples Gazette had in May announced the suspension of Ms Bala Usman.

Officials said Messrs Koko and Amaechi are allies, but the minister could easily promote the finance director because it was a choice that appealed to the president’s sentiment.

Also, in May, Mr Buhari’s media aide Garba Shehu said, “The president has also approved that the Managing Director, Hadiza Bala Usman, step aside while the investigation is carried out. Mr Mohammed Koko will act in that position.”