Buhari to Nigerian youths: Behave well if you want jobs - The Naija Weekly

Buhari to Nigerian youths: Behave well if you want jobs 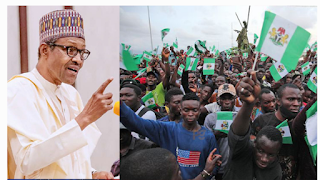 According to the National Bureau of Statistics, in the second quarter of 2020, almost 14 million of the country’s youngsters are unemployed.

Last December, the president of Africa’s most populous nation announced his plans to take 100 million Nigerians out of poverty.

However, in an interview with ARISE TV broadcasted on Thursday, Mr Buhari suggested that such a promise was conditional.

“I have ordered the members of the executive council to go (to) each state to speak to the governors, the traditional leaders, (and) the business people to tell the youths that if they want jobs, they would behave themselves,” said Mr Buhari.

Asserting his stance, the former military dictator added, “And (they should) make sure Nigeria is secured so that people can come in to invest because people know Nigeria is secured. We are (a) rich country, and God had endowed us.”

Mr Buhari also believed that the #EndSARS protests that rocked the country last October were a vote of no confidence in him.

According to him, Nigerians’ anger was directed at him during the mass protests, saying, “You remember the young people who wanted to match here (Presidential Villa) and remove me.”

The #EndSARS protests began with a demand for the Special Anti-Robbery Squad’s dissolution and an end to police brutality.

The protests also led to the demand for better governance and institutional reforms.

Last December, Mr Buhari had tweeted, “We remain committed to the plan to lift 100m Nigerians out of poverty. To this end, I have approved an increase in the scope of our Social Investment Programme: Doubling of @npower_ng beneficiaries to 1 million; 1 million new @geep_ng beneficiaries & 5 million new pupils for @NHGSFP.”