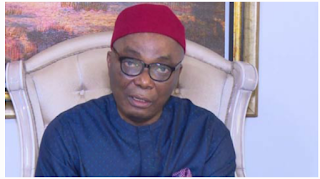 Mr Aneke held that the prosecution’s case collapsed when it failed to call vital witnesses and lead concrete evidence to establish its allegations.

Nwaoboshi, PDP senator representing Delta North, was arraigned in 2018 by the EFCC on two counts of money laundering.

He had pleaded not guilty to the charge and granted bail.

The trial commenced before Justice Mohammed Idris on April 25, 2015, but following the elevation of Mr Idris to the Court of Appeal in June 2018, the case began afresh on October 5, 2018, before Mr Aneke.

The EFCC alleged that Mr Nwaoboshi committed the offences in May and June 2014 in Lagos, accused of acquiring a property described as Guinea House on Marine Road in Apapa, Lagos, for N805 million.

The prosecution explained that N322 million of the money formed part of the proceeds of an unlawful act, claiming the fund was transferred to vendors by order of Suiming Electrical Ltd.

Delivering the judgment on Friday, Mr Aneke first read out the charges and then reviewed the evidence as tendered by witnesses and evaluated essential ingredients of the counts.

He held that the evidence led by the first prosecution witness (PW1), Prince Kpokpogri, was based on a call from an anonymous person, adding that he did not tender the documents supplied to him by the said anonymous person who was not called as a witness to testify.

The judge held that the evidence of the first prosecution witness could therefore only qualify as hearsay. Mr Aneke consequently held that none of the elements of count one had been proved. He said this failure collapsed the case of the prosecution.

“In count two, the ingredients of count one must first be proved before the defendant can be found guilty. The result is that the prosecution’s case is dismissed, and all the defendants are discharged and acquitted,” he held.