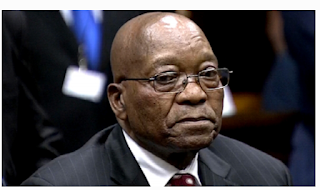 He was sentenced by a South African court to 15 months’ imprisonment.

Mr Zuma’s reign as president was marred by corruption scandals. He had refused to appear before the court citing witch-hunting and distrust in the judicial system.

His conviction was announced on Tuesday.

“To Mr Zuma specifically, his contempt is rebukable in the strongest sense. In determining the length of the sentence, the majority has considered the unique circumstances of this matter, the nature of the breach and the extent to which the breach is on-going,” Acting Chief Justice Sisi Khampepe said while pronouncing judgement Tuesday.

“Not only has Zuma failed to dispute the contempt of court, he has also failed to contest the degree of the contempt. Instead, he has aggravated it. The majority judgment orders an unsuspended sentence of imprisonment for a period of 15 months.”