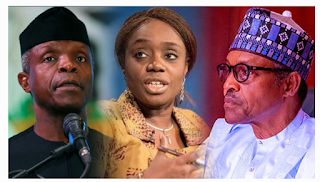 Ms Adeosun resigned and fled to the UK after she was found out for using a fake NYSC exemption certificate to secure jobs in Nigeria and a political appointment in President Muhammadu Buhari’s regime.

Though she committed a crime, Mr Buhari and the country’s security agencies turned a blind eye and Ms Adeosun fled to the UK.

On Sunday, notwithstanding her criminal record, Mr Osinbajo praised Ms Adeosun for helping orphans, vulnerable children, and less privileged people at the inauguration of DashMe Store, an online component of Dashme Foundation.

DashMe Foundation, Ms Adeosun’s initiative, aims to change the lives of orphaned and vulnerable children, youths, and victims of domestic violence in West Africa by funding indigenous organisations that work with them.

“But most of all, her commitment to the notion that all service to man is actually service to God; that we owe the people, especially the poor and underprivileged, not just empathy but concrete and creative provision to enable them live their best lives.

“This is why as a minister, she prioritised the social investment programme when for the first time, we voted almost N500 billion of our annual budget to welfare programmes for the poor,” said Mr Osinbajo.

Mr Osinbajo further stated, “I am, therefore, really not surprised that she has decided to use some of her enormous talent and influence to establish an organisation that raises funds and resources for indigenous grassroots charities working with orphaned and vulnerable children, disadvantaged youths, and victims of domestic violence.

“The DashMe Foundation is in every sense, who Kemi Adeosun really is.’’

Ms Adeosun said there were 17.5 million orphaned and vulnerable children in Nigeria, pointing out that the tradition that supported such children, the extended family, has been abandoned with urbanisation.