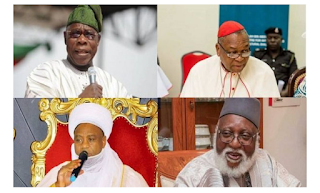 The meeting, which held at the Transcorp Hilton, lasted nine hours.

It was learnt that the meeting also deliberated on other national issues, such as unity, peace, integration, economic revitalisation and development.

Reporters were not allowed into the venue of the meeting on Thursday.

One of the organisers, who spoke in confidence, told our correspondent that media houses were not invited to cover the event.

But many of the attendees declined making comments about what transpired as they swiftly left the venue into their vehicles to avoid interviews.

After several promptings, Obasanjo told reporters that a communiqué would be issued later.

When asked about the outcome of then parley, Onaiyekan said: “We all discussed how to make the nation better.”