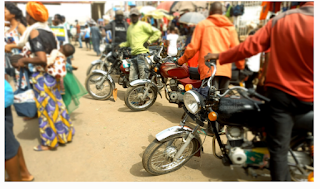 Governor Abubakar Sani-Bello of Niger has launched a joint security task force for the enforcement of a ban on commercial motorcycles in Minna metropolis.

Mr Bello was represented by his deputy, Ahmed Ketso.

Other members of the task force are the police, the Nigeria Security and Civil Defence Corps (NSCDC), the army and local security operatives, among others.

The governor said that the enforcement was necessary to ensure the safety of lives and property of the citizens of the state.

Mr Bello enjoined the joint security task force to carry out the exercise in accordance with the rules of engagement.

He noted that whoever violates the ban would be prosecuted while assuring the joint task force of the government’s unalloyed support.

“Anybody who resists or disobeys the order would face the wrath of the law. We can not afford to enact a law for the protection of lives and property and people will violate the law,” he added.

In his remarks, the Commissioner of Police in Niger, Adam Usman, assured that the state government’s policy on the ban would be enforced effectively and within the confines of the law.

On June 2, Mr Bello banned the use of commercial motorcycles in Minna with effect from Thursday.